RockOrange is at the forefront of a cultural and creative resurgence, and it’s all taking place within blocks of our new home in Miami’s Little Havana. Just months following our move to a 17,000-square-foot creative campus in the heart of the historic neighborhood, we unveiled a new street art mural by local artist Daniel Fila, better known as Krave, setting the visual tone for the new “LiHa.” 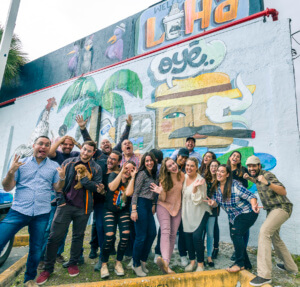 Little Havana has seen a recent rise to prominence led by increased commercial and residential development, a thriving arts scene, cuisine and nightlife.

Our agency founders Miguel Piedra and David Naranjo, both Miami natives, had headquartered in the corporate suites of Blue Lagoon during the agency’s first three years (RockOrange was formed in 2013). The pair of Cuban-Americans, both raised in Miami, moved their headquarters to the area in 2016.

Last week, Krave, Miguel and David held a Facebook Live event showing everyone around the new jewel of LiHa. Check it out:

The mural, adorning the side of RockOrange’s headquarters, is a unique work of art reflecting the culture of a uniquely American area using familiar imagery: a Miami Metro Mover; a cigar-smoking gentleman wearing a panama hat; the renowned Cuban-America salsa performer, Celia Cruz; and Krave’s signature character, The Fresh Monkey. In a city where all neighborhoods come to be known by nicknames, six-foot-tall letters span the top of the mural spell out the word “LiHa,” cementing Little Havana’s new moniker.